This study assessed the book collection of five selected medical libraries in the Philippines, based on Doodys’ Essential Purchase List for basic sciences and clinical medicine, to compare the match and non-match titles among libraries, to determine the strong and weak disciplines of each library, and to explore the factors that contributed to the percentage of match and non-match titles.

List checking was employed as the method of research.

De La Salle Health Sciences Institute and University of Santo Tomas had sound medical collections based on Doody’s Core Titles. Collectively, the medical libraries shared common collection development priorities, as evidenced by similarities in strong areas. Library budget and the role of the library director in book selection were among the factors that could contribute to a high percentage of match titles.

Libraries typically aim to keep their collections fresh and updated based on client needs and professional standards. Aside from quantity, the quality of collections is constantly improved and maintained, because this is one of the fundamental services of libraries. High-quality collections also demonstrate the relevance and importance of libraries to the communities they serve. Thus, collection analysis is a significant aspect of library management.

List-checking is a method of collection analysis that librarians use to ensure the quality of resources. It establishes the authoritativeness and relevance of a collection. Faigel noted that it is the most popular method used to qualitatively evaluate collections [1]. Crawley-Low said that it reflects local needs of patrons and identifies strengths and weaknesses of a collection [2], and Bergen and Nemec believed that it can serve as a basis for collection assessment initiatives [3]. Johnson mentioned that it can develop a librarian’s subject expertise [4].

Shedlock and Walton described Doody’s Core Titles (DCT) in the health sciences as a guide to selecting core titles in health sciences literature that was established in 2004 in response to the cessation of the Brandon/Hill list [5], which previously was the authoritative selection guide for health sciences titles. In his review of DCT 2004, Spasser pointed out that while the list might not be perfect, its selection and rating criteria are noteworthy, and it is an essential collection development tool for the health sciences [6]. Fischer evaluated DCT and found it to be comprehensive and its selection committee well-represented by medical and allied health faculty and librarians [7].

DCT identifies certain titles as “Essential Purchases” that are important for a small library collection [8]. These titles are categorized by specialty and are selected by at least two librarians. The items on the Essential Purchase List can be considered to be a base collection as opposed to all selected titles, which would be considered a core collection. Lamb defined a base collection as recommended titles used to build a new collection [9]. Therefore, DCT is an important tool for collection analysis among medical libraries and information centers. It helps libraries identify the minimum requirements or standards when building their collections, especially when their budgets are very limited. It can also be used to measure the value of an existing collection against a set standard, to identify the strengths and weaknesses of a collection, and to compare collections across different medical libraries.

The author assessed the book collection of selected medical libraries in the Philippines based on DCT 2014 Essential Purchase Titles for basic sciences and clinical medicine. I compared the percentages of match and non-match titles among libraries and determined the strong and weak disciplines of each library. Furthermore, I explored the factors that can contribute to differences in the percentage of match and non-match among libraries.

In the assessment of strong and weak subject areas, subjects consisting of less than three titles were excluded from the list. These subjects were: anatomy/embryology, biochemistry, immunology, microbiology, and neuroscience for the basic sciences; critical care, endocrinology, gastroenterology, health care administration, laboratory medicine, nephrology, ophthalmology, rheumatology, and urology for clinical medicine.

Exact and near-match titles among libraries

Match and non-match titles among libraries

Strong and weak subjects among libraries

Tables 3 and 4 present the strong and weak areas in basic sciences and clinical medicine titles, respectively, among libraries based on the percentage of match titles. Regarding basic sciences titles, most libraries were strong in physiology but weak in epidemiology and biostatistics. In terms of clinical medicine titles, most libraries were strong in dermatology but weak in other subjects. For most of the strong subjects, all DCT recommended titles (100%) were available in the libraries’ collections. 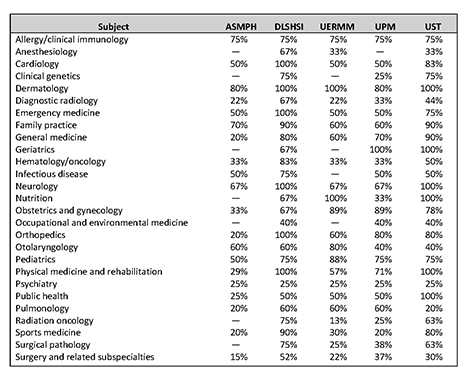 Table 5 presents characteristics of the five libraries. UST and DLSHSI had the highest percentage of match titles as well as the largest book budgets. However, these two libraries differed in age, with UST being the oldest library and DLSHSI being the second youngest library. UPM had the highest percentage of near-match titles. This library was the second oldest library and had the largest book collection. ASMPH and UERMM ranked first and second, respectively, among libraries with the highest percentage of non-match titles for basic sciences, clinical medicine, and combined titles. These libraries had the smallest budgets, and ASMPH was the youngest library. The library directors of all libraries, except UERMM, had the authority to select books for their libraries. ASMPH, DLSHSI, and UPM used DCT as a selection tool. Rather than DCT, UST used National Library of Medicine and Brandon/Hill core lists, and UERMM selected books based on the prescribed textbooks of its faculty.

I found that UST and DLSHSI had sound and good-quality collections with the highest percentages of matches in basic sciences, clinical medicine, and combined titles. UPM and UERMM had high percentages of near-matches, reflecting the obsolescence of their collections. ASMPH had the highest number of non-match titles, which suggests deficiencies in its collection.

All five libraries had comparable strong subjects in basic sciences and clinical medicine, which shows similarities in their collection priorities. However, the libraries had different weak areas. Due to budget limitations, it may difficult to develop all weak areas at once. Thus, one library might choose to develop one area, while other libraries might strengthen another area. These differences in weak areas could be considered a driving force for forming consortiums for collection sharing.

This study has limitations that should be acknowledged. Even if a title was owned, it might not have been available during the period of evaluation. My findings represent a snapshot of a moment in time, thus holdings could be different if checked at a later date. Differences in library mission and financial or space limitations may be other factors influencing their collections, but these are beyond the scope of the study. For instance, the library or medical program might not be among the high-priority departments or academic programs of a university, which could result in a lower budget and minimal management support, thereby lowering the quality of the library collection. Space limitations may drive some libraries to acquire e-books and not catalog them in their OPACs, and thus these titles might not be accounted for when the OPAC is searched for match titles. Use of a larger checklist might have been desirable, especially since some of the subject areas were exceptionally small. Further studies could include checking the libraries’ collections against the entire DCT core titles list. A user-centered collection assessment technique could also be employed to provide useful feedback on the actual use and relevance of the collection.

Articles in this journal are licensed under a Creative Commons Attribution 4.0 International License.